Image does not exist

The bridge was built in 1959 as a single span.  In 1972, five spans were added onto the original structure in anticipation of the construction of the railroad classification yard - West Colton Yard - over which the eastern section of the bridge passes.  West Colton Yard is one of the largest railroad hubs for UPRR.  With the understanding that the Los Angeles/Long Beach ports move 40% of the nation's cargo throughout the United States, much of that cargo is offloaded onto rail cars traveling directly through the West Colton Yard and under the City's UPRR bridge crossing.  As such, the Riverside Avenue corridor is an important segment of the regional trade network, connecting people to jobs and freight between marine ports, railroad yards, and warehouse/distribution centers.

The purpose of the Project is to relieve congestion, improve throughput, reliability, and multi-modal accessibility along this Critical Urban Freight Corridor, as well as to address dome of the needs of the adjacent disadvantaged, environmental justice community.  The Project will expand the existing bridge over the UPRR to match the configuration of the recently completed I-10/Riverside Avenue Interchange Phase I project, which was widened in 2011 by the California Department of Transportation (Caltrans) and the City.  This will allow for the extension of the dual northbound left-turn lanes for traffic entering the I-10 westbound on-ramps.  Currently, the five-lane bridge would include five lanes in the northbound direction; two lanes that feed into the two left-turn lanes for the I-10 westbound on-ramp, two through lanes, and one shared through/right-turn lane.  In the southbound direction. the new bridge would maintain the two through lanes.  The Project will also provide a continuous sidewalk on Riverside Avenue from the I-10 to Slover Avenue. 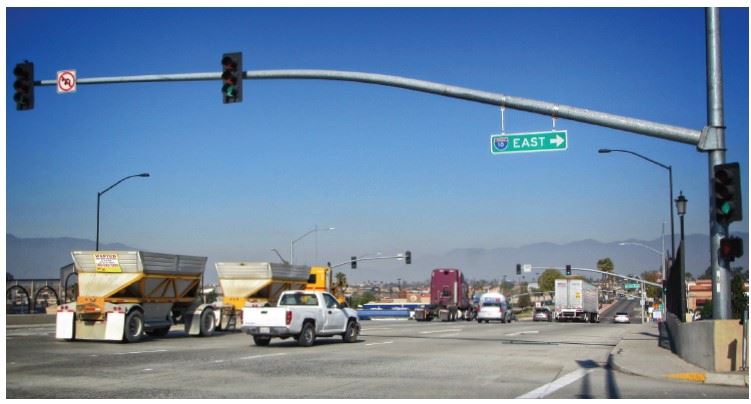 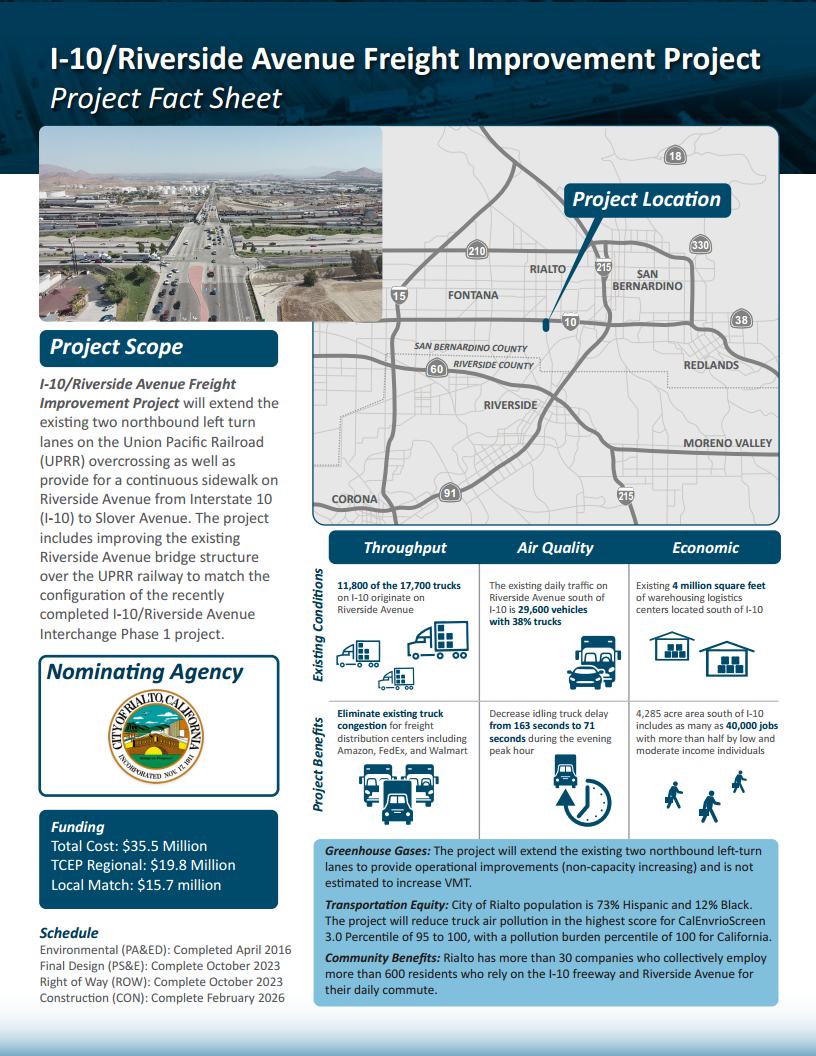 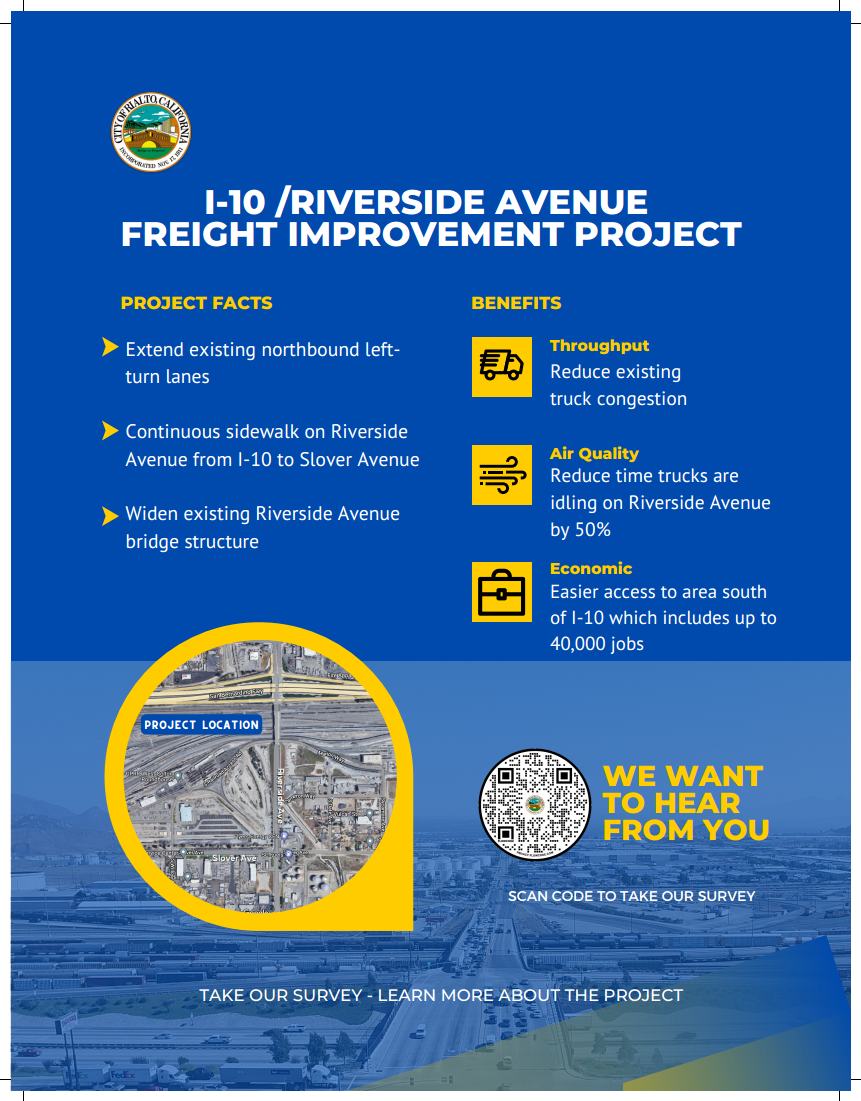 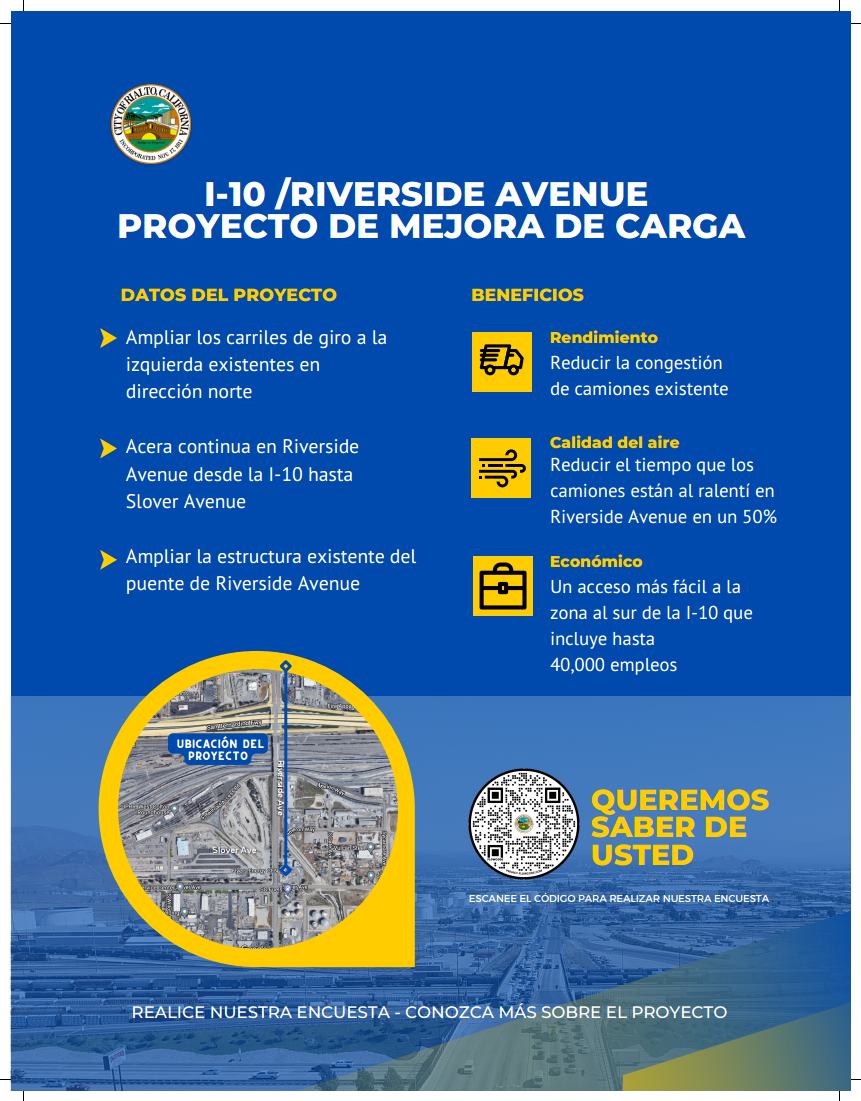 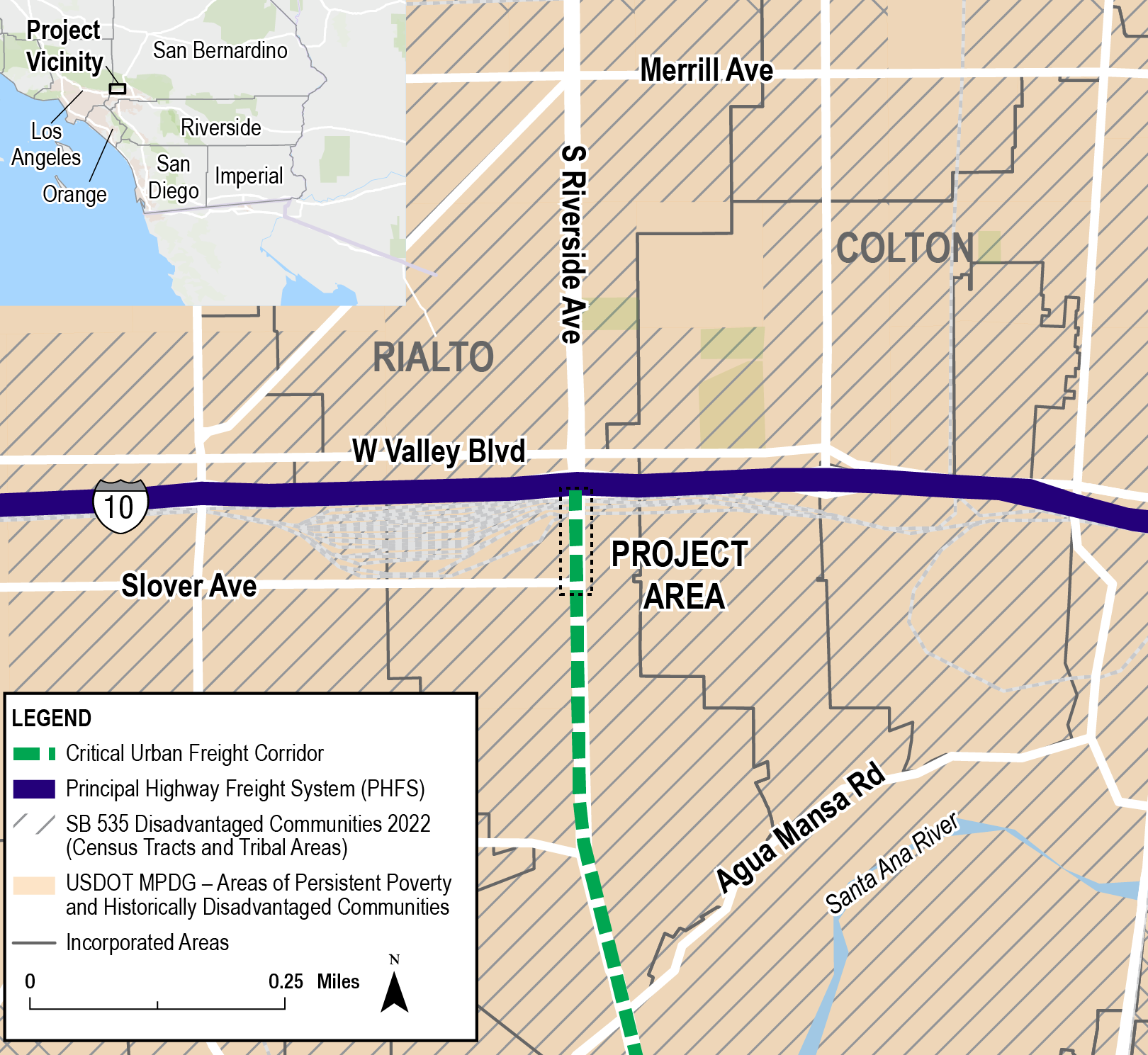 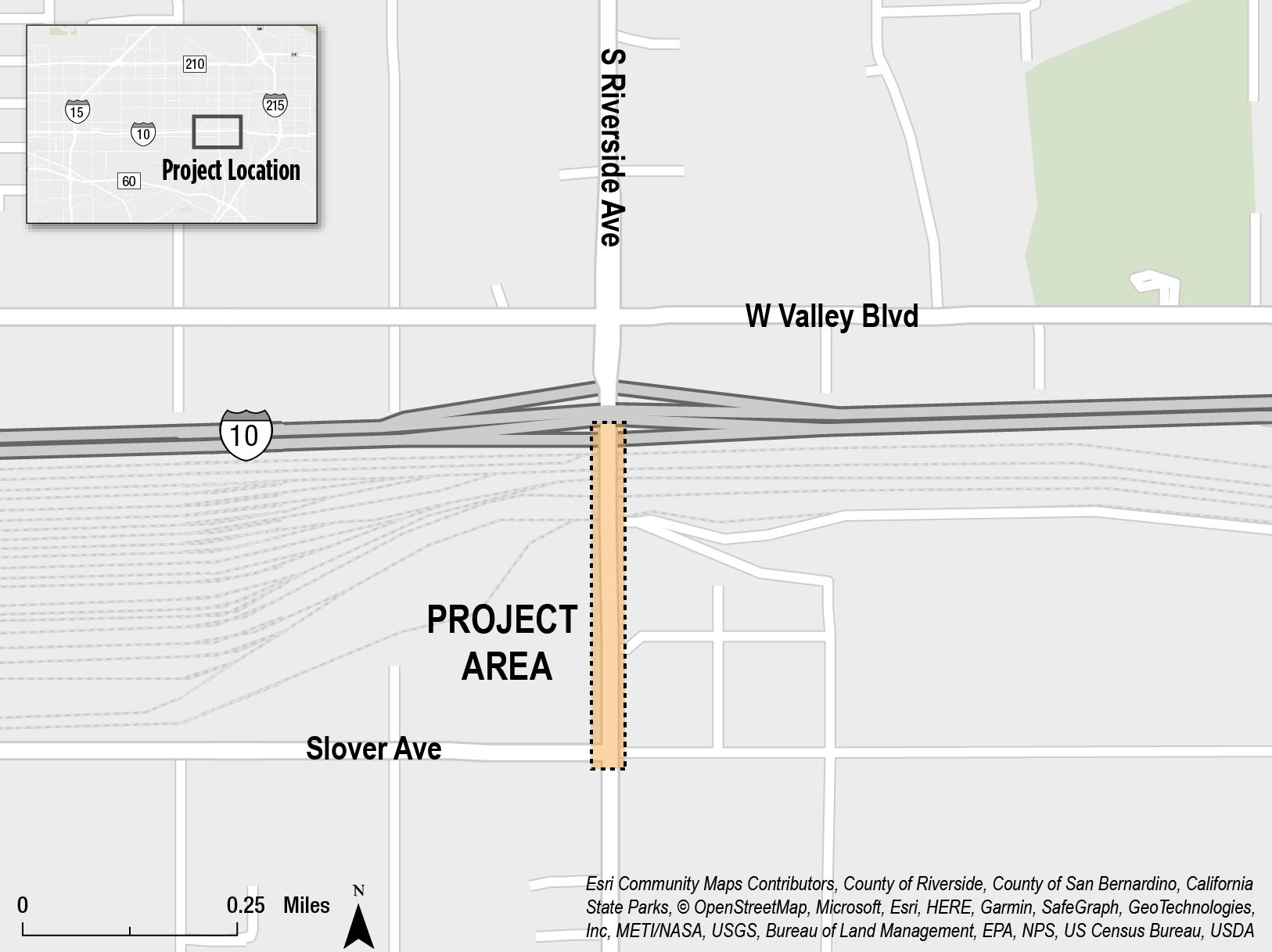 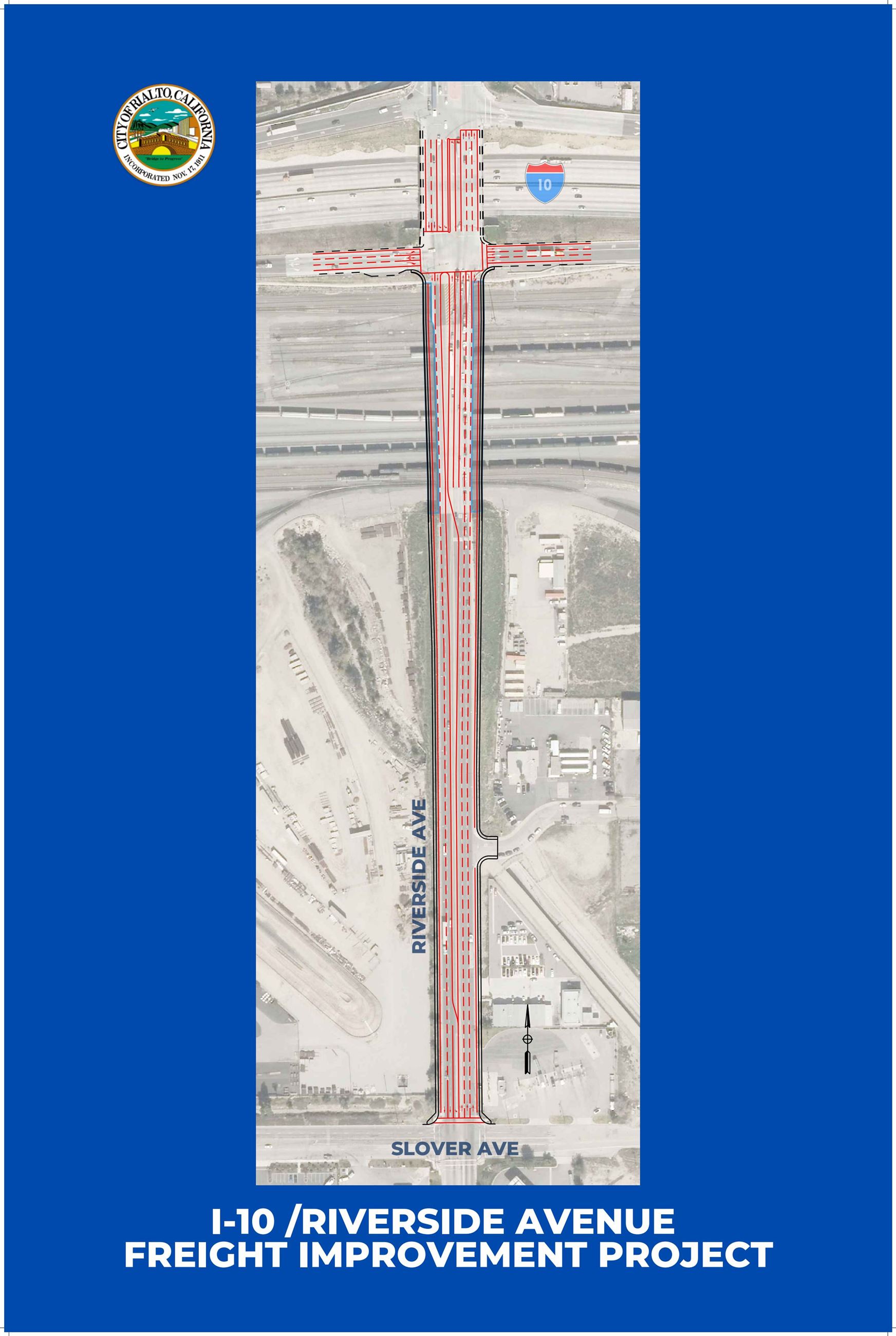